For general discussion of polyhedra, not necessarily Stella-specific.
Post Reply
6 posts • Page 1 of 1

Some of you might know that I am interested in heptagons. The background for this interest is that if you ignore polyhedra with prism and anti-prism symmetry then the heptagon forms the first gap of polygons for which there aren't any uniform polyhedra. Even if you look at the Johnson solids, where you don't require any symmetry then heptagons are missing. Besides, it seems that most people totally ignore heptagons, i.e. this seems to be an unexplored area. 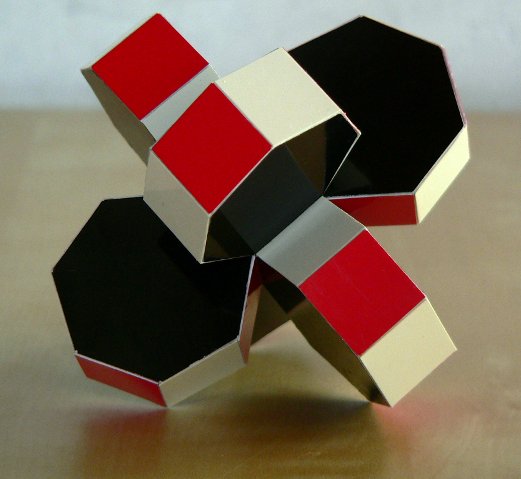 I built a few of these, but such models aren't very exciting, really.

To do something more, you will have to let go of some constraint. A few years ago I found one that was quite exciting (for me) and then I succeeded in finding polyhedra that only consisted of regular heptagons,... with some constraint of course. This constraint was that I allowed the heptagons to be folded over a diagonal. The main weakness in the article is that I don't prove that any of these consist of heptagons that are really regular: numerically they only seem to be. In the mean time for some of them I do think I have a (non-published) prove that some of them really consist of regular heptagons.

One other thing that I found a pity at that time was that I didn't have a polyhedron with A5 symmetry; i.e. that only has the rotational symmetry of an icosahedron (i.e. no reflections). I find these models with only rotational symmetry more attractive. Later I did find some polyhedra and one of them wasn't too complex. I started building a model of this in 2014, but I had to quit. There was too much tension in the model that caused it to "collapse" inwards. Probably caused by the thickness of the cardboard I am using (and the shape of the model). I got quite frustrated and I ended up taking a long break from building models (not only because of that).

Later it was Magnus Wenninger's passing away that got me inspired again and some weeks ago I had gathered enough courage to try to build this one again. This time I gave it some more thought: I made some change in the construction and I am confident that I will finish the model soon.

A 3D image can be found here:
http://tunnissen.eu/polyh/local_off.htm ... istance=18
The link above is a link to a 3D online off-viewer (you can load off-files that have the exact same domain name and you can load local off-files, e.g. that you downloaded to your phone). The above URL also contains a link to an off-file that you can download and then load in Stella. You can see that the model doesn't have any intersections.

If anyone is interested in off-files of some other polyhedra that only consist of regular heptagons, I can post them here too.
Top

yes I ˋd love to see more of those off-files. Please post them.

Here is a zip-file with 24 examples of polyhedra that only consist of regular heptagons. I found more of these, but some are quite messy and I didn't include them here. I just noticed that one off-file of a model that I built is missing.

I also found polyhedra that have other regular polygons next to the regular heptagons. These aren't included here either.

folded-heptagons-off.zip
Off files with polyhedra that only consists of folded regular heptagons
(104.05 KiB) Downloaded 82 times

I finished the model. This time I succeeded. It's a relief that I succeeded this time. Apparently this was not my Nemesis.

Here is a picture into an order 5 symmetry axis:

For my next project I am thinking to build a compound of 15 cubes.
http://tunnissen.eu/polyh/local_off.htm ... I.D2xI.off
Don't want to make it big though, so it will be a challenge.
Top

I did start with that one; I constructed 1/12th, and it seems I will be able to make it, as an intermezzo I made a variance on the Nemesis mode, since I know a good way of constructing these models now. Here are two pictures of the one I just built.

Obviously some more variances exist and I am planning to construct a few more of them.
Top

marcelteun wrote: ↑
Wed Nov 27, 2019 7:28 am
Obviously some more variances exist and I am planning to construct a few more of them.

Here is another one that I built recently: 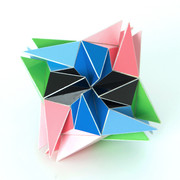