Many years ago I played with something that I call "truncation rotation" - see the following pic: 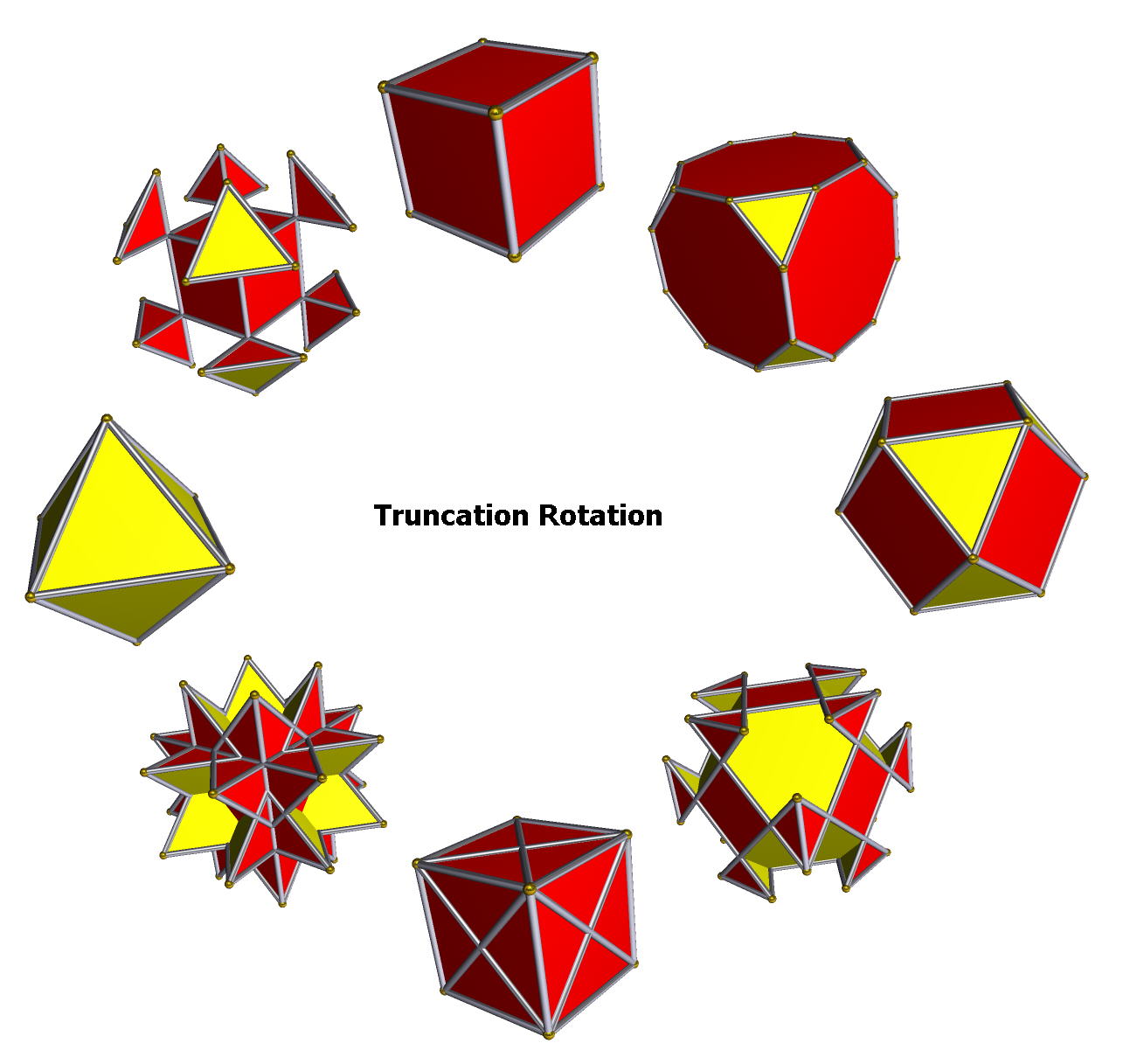 What it does is start with a polyhedron and truncate it through many forms which will then cycle back to the begining - in the above example we start with a cube, it then goes through the truncated phase, then we get the cuboctahedron, it continues through the "hyper truncated cube" phase and then it hits a degenerate polyhedron which looks like a cube with a stella octangula hidden inside, continuing we hit the quith phases and then an oct+3 squares degenerate, finally we go through the antitruncated cube phase (looks like cube with pyramids dangling off corners) and it finally reaches the cube again ready to do the cycle again - this would be a lot of fun and could easily be added with the dual morphs.

The best way to do it would be to have the vertices follow great circles that contains the edges (cube's edges in example) as chords. Starting at the original's vertices - the new vertices will travel around the circles tracing out the new faces, when the new vertices are half way across the chords we will be at the rectified stage (cuboctahedron in example), when we get to the vertices at the other side of the chords we will be at the "cube-so" degenerate (for the cube example) - continuing on, the new vertices will reach a point on the great circles (in the cube example) where they are above the square faces - this is the oct-squares degenerate - then the new vertices will travel until they are on the opposite side of the great circles (it will look like the cube again) - so going around 180 degrees on the cube will go through the complete cycle, 360 degrees will go through it twice. If we started with a tet, at 180 degrees the new tet will be in dual position, so we need to take it 360 degrees to get it back up right.

We can also do rhombation rotation: 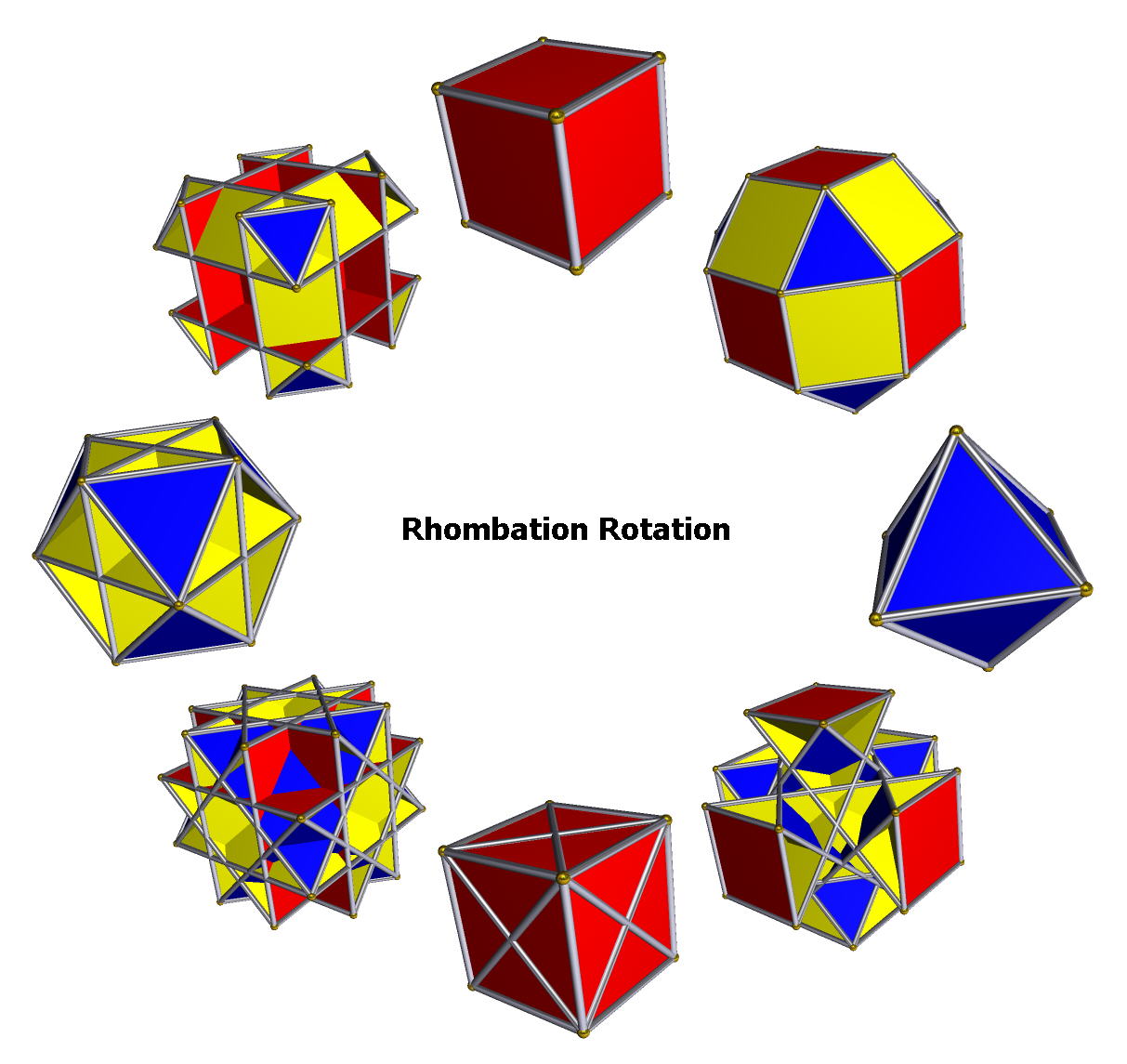 it works in a similar way, while we're at it why not "socco" and "sroh" rotations which will be in the same rotation regiment as the rhombate rotation and take it into socco-gocco phases and sroh-groh phases respectfully. The ultimate ones will be the great rhombate and snub rotations which will need two degrees of freedom, they will cause the new vertices to travel around a sphere instead of a great circle. There can also be the dual versions of these rotations also.

I hope to see these added in the future.
May the Fourth (dimension) be with you.
Top

Jabe wrote:Many years ago I played with something that I call "truncation rotation"

Believe it or not, I've had something very similar on my to-do list for some time, but I'd never noticed the cyclic nature of the transform. I already have morph-by-truncation, so I was thinking of an extension to that where the truncation continues rather than switching direction towards the dual somewhere along the line. I knew the cube would end up at quith, but the way I was picturing it, the original cube face planes would remain while the dual octahedron's face planes continued to be pushed right through it. I'm not sure where that ends up. I suppose it would fall apart at the degenerate octahedron stage in your cycle.

The great rhombate I don't follow. You mention 2 degrees of freedom. Do you see the process as well-defined? It looks to me like you could still use great circles, placing vertices on two great circles placed between consecutive edges. You'd go from cube to truncated cuboctahedron that way, but I'm not sure about other targets that you might want to hit along the way. It could maintain regular hexagons though throughout.

Snubs could also be obtained while vertices stayed on great circles, just by connecting the cube verts to the snub verts with such great circles, but it requires a kind of knowledge of where you want to end up to know what angle those great circles are on.

Finally, I like to handle as generic polyhedra as possible in Stella. My dual-morphing techniques are generalised to work for most polyhedra, not just uniform ones. I'm not sure how your idea generalises. An edge might have one vertex closer to the centre than the other. You can still make a great circle from it, and I guess each vertex could travel at a constant distance from the centre throughout, but would the deforming faces necessarily stay planar? And when doing rhombation, "half-way between" probably isn't a good generalisation. Hmm, maybe it is more that the vertex figure should be reciprocated and the resulting corners point the way.

OK, maybe I've talked myself into thinking that it would generalise quite well! Just the planar faces remain a worry.

We can think of the great rhombation in the following way, if we move the corner along the edge - it would mimic the truncation feature, if we go between the edges (towards the square face in the cube) it would mimic rhombation, in between we would find various gircoes, where the center has regular hexagons, but towards the ends have ditrigons, if we over shoot past the truncations or rhombations we would get retro ditrigons (like ditdid or gidtid verfs) - the snubs will simply be the alternations of the great rhombates - I'll see what kind of graphic I can come up with to display this. By the way think you might add the retrorhombation (socco tread) and the other version (sroh) - this would be quite fun along with the regular rhombation (could make this a toggle - click on the rhombation rotation to turn it on, click it again for socco, and again for sroh, a third time to get it back to regular.)
May the Fourth (dimension) be with you.
Top

Whew! - pulled an all nighter on this graphic - it helps shows how grombate rotation would work - notice that the truncate and rhombate rotations are sub-sets - I also went full 360 degrees, so each polyhedron shows up twice on opposite sides of each other - here are two views: 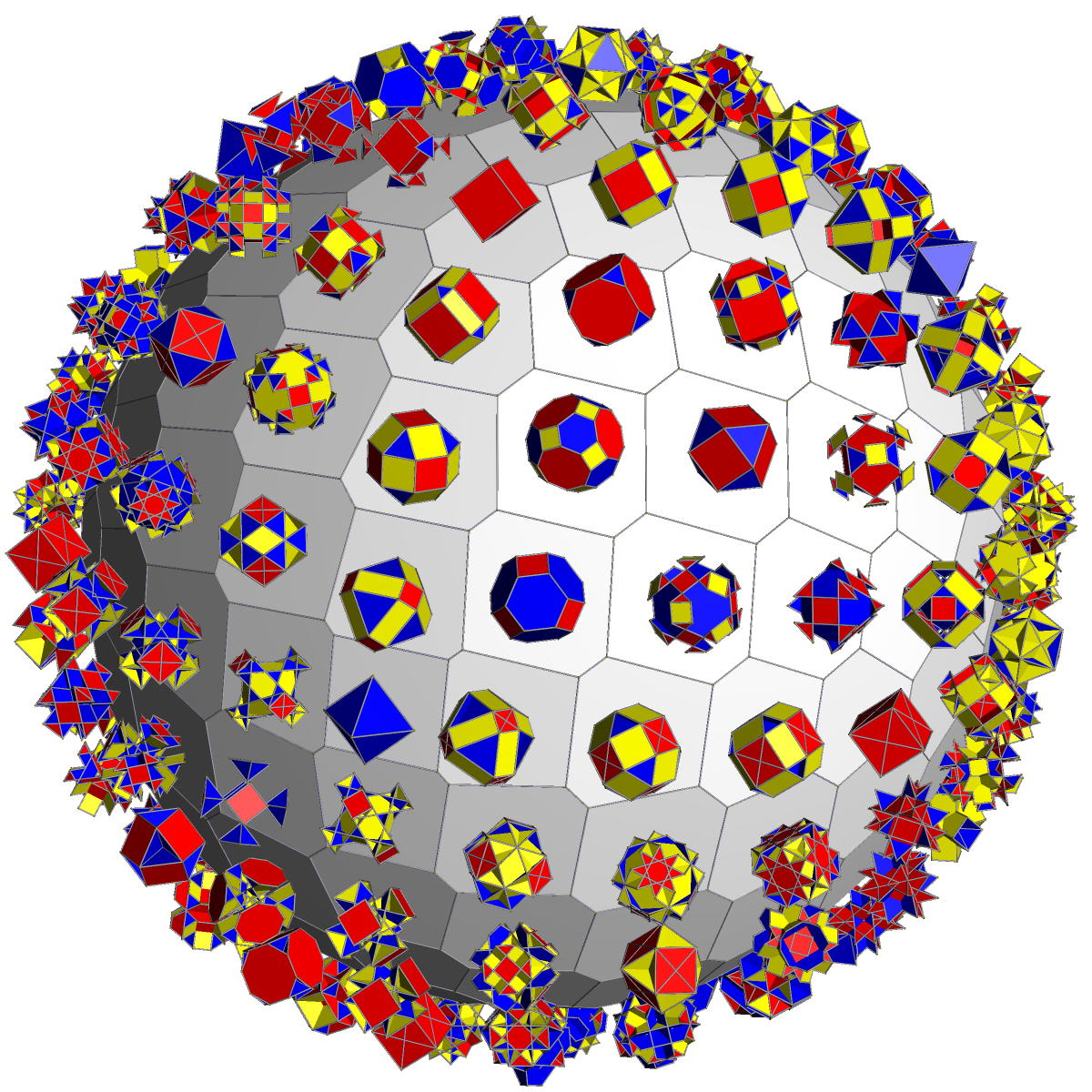 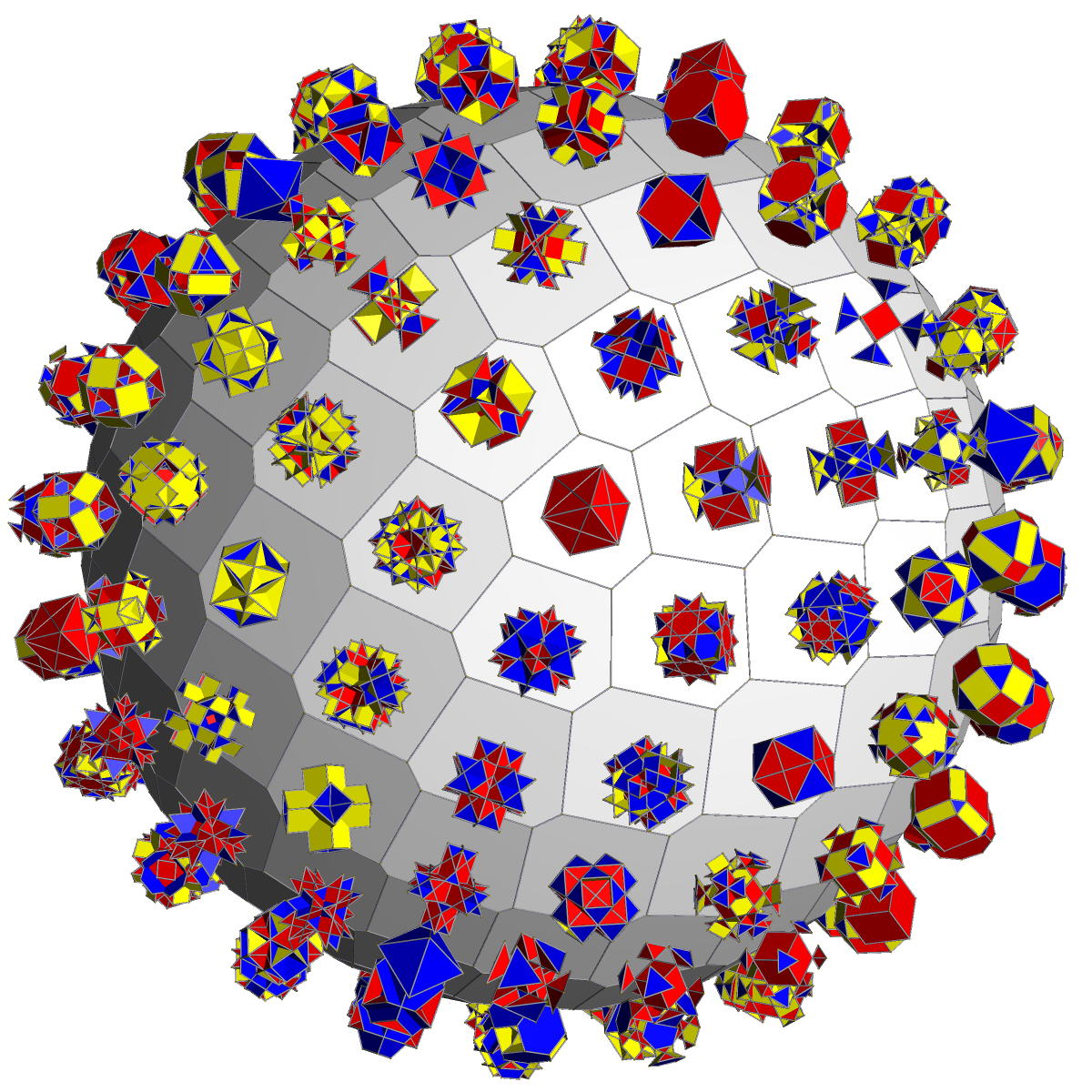 May the Fourth (dimension) be with you.
Top

Ha, nice graphic, must have taken some time

I've just realised that this feature is even closer to another item that's been on my to-do list for some time, the ability to grab a vertex and move it around, with other vertices of the same type moving symmetrically. If the vertex occurs in chiral pairs, then moving the other chiral set could be optional.

No movement which would require the creation of additional vertices would be permitted. So when a vertex lies on a symmetry axis, it may not be moved. If it lies in a reflection plane, then it may only be moved within that plane unless not maintaining reflexibility. There could be an option to constrain the vertex to a reflection plane otherwise.

To do what you call truncation rotation, you'd just start with a truncated cube and constrain the vertices to their reflection planes. Similar for all the other variations you've mentioned.

The problem however is knowing what the minimal set of constraints is to ensure that faces remain planar. For example, vertices of the truncated cube should really always be constrained to their reflection planes in order to keep the octagons planar. Similar with the rhombicuboctahedron in order to keep the 12 "rhombic" squares planar. The snub cube would have no constraints.

I believe there are some more wacky examples though, like some of Bruckner's isogonal isohedra with far less predictable constraints (vertices needing to follow paths other than great circles, I think, in order to maintain planar faces).

That graphic was a lot of fun to make too, let me know if you want the .stel file. The vertex grab idea would be perfect for this, make sure that mouse inertia is included so we can watch the rotations in action - a good name for this feature might be "kaleidoscope" - any chance it could be used on the polychora

May the Fourth (dimension) be with you.
Top

I know the last comment is more than a decade old, but I want this.
Top

It's funny, because you bumped it, I started reading the original post thinking it was new. I was even thinking my reply would start with "Believe it or not, I've had something like this on my to-do list for ages" and then I see that I already replied something like that 12 years ago!

Everything feels stuck at the moment. Too many things to do and too many obstacles, with Stella and everything. First I just want to get ANY new version out, but it's taking time to pull everything back together. Will get there eventually.
Top
Post Reply
8 posts • Page 1 of 1