The place to talk about Stella4D, Great Stella, and Small Stella. Feel free to ask questions about them here.
Post Reply
11 posts • Page 1 of 1

New feature or one I am unaware of... Is it possible to export Stella files for 3D printing? If so how? If not could that be done? Albert
Top

From Stella's menu you can export a 3D model as .STL and some other formats. .STL is the standard for 3D printing.

You may want to try doing this with a Stellation view selected rather than the base view. This will only export the visible parts, and not all the hidden intersecting parts as well, which some 3D printers may have trouble interpreting.

Another tip is you can display edges as cylinders and vertices as spheres, and then hide all the faces before exporting, to export a hollow model with just edges and vertices.
Top

I'm sorry to trouble you again, but I did the things you instructed me to do (stl file format in base stellation view) to be able to 3D print. Unfortunately, Shapeways had trouble with the files. I work with surfaces like the ones attached and one sided surfaces like the Mobius strip that I would like to 3D print. Any suggestions would be greatly appreciated. 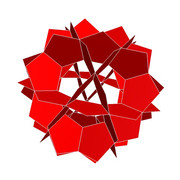 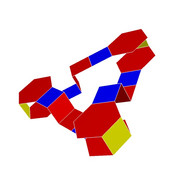 3D printers require a solid enclosed volume. Looks like you're hiding some faces but not others, so the parts are infinitely thin. It would not be easy to thicken these surfaces in Stella. I don't know whether another app provides a way to do that. Might be a good option for the future, but sorry, I don't know what to suggest for now.
Top

Ok, well do you think you will create a thickening App for surfaces anytime in the next year?
Also, is there an export file for augmented reality and or virtual reality files?
Thank you, Albert
Top

Probably safer to presume I won't be adding such a feature within the next year. I've thought about it before though to help with what I call topological models, which are otherwise tricky to make, eg https://www.software3d.com/HollowSSD.php But it's not something I have any immediate plans to look at.

What format would you need for AR/VR? Stella can export several 3D formats, so one of those could probably be used with a VR/AR viewer.

Stella can also display 3D stereo images, for use with either red/blue glasses or with the two images side-by-side which can be viewed directly (cross-eyed or wall-eyed) or maybe with a 3D headset (but I don't have one so I'm not sure).
Top

Ok, I thought it might not be a priority, but thought I'd ask anyway. Thank you for responding so promptly, I really appreciate it. The Topological Small Stellated Dodecahedron is a beautiful model. Do you have an interest in other topological structures besides links such as knots or braids? I put a few on my other feed to share that I made with GS. There is also a Klein cube I made with GS too.
Thanks, Bert (aka Albert)
Top

You can try to augment the faces with thin prisms and then export a stl-file. It's a bit complicated and the result isn't very exact, but it should work. 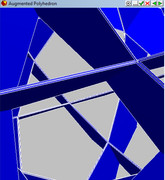 Thank you Ulrich, I'll give that a try and post the results later.
Albert
Top

Ulrich, so I was able to render a "thick" annulus and faceted cuboctahedron in Stella, but the STL file did not work in Shapeways. Not sure how to fix that. Will try something else. Thank you again, Bert
Top
Post Reply
11 posts • Page 1 of 1